Black chicken eggs are one of the most sought eggs among chickens’ keepers. And some breeders have dedicated their time to breed chickens that lay black eggs.

Do Any Chickens Lay Black Egg?

You may have come across beautiful black chicken eggs trending around the internet at some point and this left you with a dream of adding them among your different eggs archive basket.

But, I hate to disappoint you, that is all that they are- an illusion.

Black chicken eggs do not exist unless you transform them with color, which is obtainable.

Having seen a lot of them circulating on social media, there is a reason this rumor got started. Despite the eggs are not black, the chickens are ( they are just as beautiful as those fake black chicken eggs). 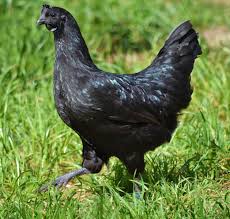 You may also be overwhelmed and skeptical by the photos of a whole black chicken, but they actually exist-it is called the Ayam Cemani (Indonesian black chicken ). The whole body of the chicken has black pigmentation, including the feather, beak comb, and skin.

That is not all; the meat and bones of the chicken are also black in color, making it a wonderful delicacy for high-end restaurants.

On a closer look, there there are hints of blue on the Ayam Cemani’s feathers, it is a sight to behold, and people will be willing to pay a pretty dollar for this rare chicken breed. Moreover, most of these chickens can sell for nothing less than $50 per chick.

Also, most breeders enthusiasts have found a pretty interesting niche. But trustworthy breeders will be sincere enough to tell that the Ayam Cemani doesn’t lay pitch-black eggs.

In fact, the eggs of the Ayam Cemani chickens are cream in color.

However, it makes sense if the chicken’s beak, body, meat, etc.,  are black, then the eggs should also be black as well, right?

Unluckily, you can only imagine the dismay of bringing home a new Ayam Cemani with the high expectation of a black egg only to find a cream-colored egg in its place.

The worse is that some breeders allow buyers to believe that their chicken’s eggs will be black. In fact, there are several articles circulating this belief.

With all things said and done, you should endeavor to research your breed before buying in order to avoid disappointment when your hens start laying their first eggs. 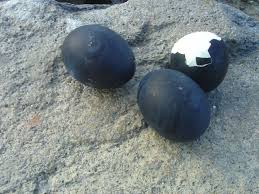 Inside white of a black chicken egg

Also, read: What Chickens are best for eggs? ( Here are my 11 best laying breeds)

The Genetics Reasons Behind the Black Chicken

Despite the black egg rumor, the Ayam Cemani will catch the attention of any chicken lover. Many chickens may possess a different color combination, but none is pigmented in as many places as this beautiful chicken.

The research was carried out by National Geographic to unveil the mysteries behind the pitch-black chicken and the reason for the black pigmentation.

Here, is what they discovered, “Most vertebrates have a gene known endothelin 3, or EDN3, which, among other things, controls skin color. And when a normal chicken is developing, certain cells like those in the skin and feather follicles, express EDN3, which trigger the migration of melanoblast, or the cells that go on to create color”

I know it is a lot to comprehend, especially with those who are not interested in genetics. Bust still, the explanation is helpful to those who are scientifically inclined.

Apart from the Ayam Cemani chicken, which is the most popular black chicken breed, there are other breeds that do not lay black eggs as well;

The Jersey Giant chicken has a beautiful black sheen, as well as the Auatralorp, but neither of these chicken breeds lay black chicken eggs, nor do they possess a throughout black beak, bone, or combs.

However, there is another breed with similar pigmentation features like the Ayam Cemani, the Silkie chicken.

The interesting thing about the Silkie is that it comes in a variety of colors. You can acquire this fluffy breed in black, blue, white, splash, etc.

The fact here is that all these varieties have black skin.

Of course, even the white version of the Silkie has gorgeous black skin, meat, and bones.

Some homesteaders have begun breeding and selling the Silkie to restaurants as a delicacy.

Notwithstanding, even though the dressed Silkie’s appearance and size are uncommon, the flavor is not much different from other chickens.

Despite the fact that the beautiful Ayam Cemani doesn’t lay pitch-black eggs, it is still an invaluable breed that is highly sought after.

Fortunately, there are pigmented bird eggs in the globe but are not produced by chickens. 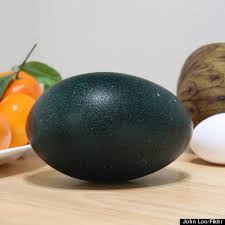 The Emu, for instance, lay a quite big nearly-black egg. The eggs have a deep dark color with a greenish tint.

Since people realized that Ayam Cemani cannot lay black eggs, they became obsessed with strategies on how black eggs.

Emu eggs are sold at unique food stores and directly from the breeders, for a whopping $30 plus per egg.

The egg is worth the price and the Emu only lay about 25 per year,  making it scarce and unavailable, unlike the chickens.

In cases you don’t know, the emu egg tastes similar to a chicken egg. The texture is different and the yolk is creamier…making it highly sought after for high-end restaurants.

Another bird that sometimes lays black eggs is the Cayuga Duck. The eggs are laid at the beginning of the season and gradually turn white as time passes.

The duck’s genetic make-up may also contribute to its ability to lay black eggs early in the season. 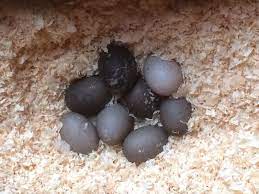 Having gone through the presume black chicken eggs, the emerald-colored emu egg, and the sometimes-black duck egg.

But if you still wish for something close to black eggs, then there are some chickens like the Maran models that lay eggs that are not black but beautiful dark chocolate color.

And varieties of this chicken breed lay darker eggs than others.

So, if you are wishing to add the darkest egg possible to your Easter egger baskets, definitely this egg layer is a sure bet.

You can also extend into adding the lighter browns, which are more stander, and you also have chickens that lay pinks, green, blue, and traditional white.

How to Color your Own Eggs Naturally

You may be disappointed in the fact that there is actually no chickens that lay black eggs, you can always go ahead and color your own,

Those black chicken eggs you might have seen on the web are probably dyed or photoshopped to look as black as they are. So, if admire the appearance of those eggs, go ahead and craft your own!

Another way to naturally color your chicken is the use of activated charcoal. Pour in activated charcoal in water and vinegar, and then soak the egg in the mixture for as long as will be enough to achieve the target result.

Why the Fascination with black Chicken Eggs?

So, what is so special about black eggs, anyway?

I must confess, that I was also disappointed when learned that those beautiful black eggs flooding the internet are fake.

Let us be sincere; we always wish to possess something extraordinary. If we are used to seeing white or brown chicken eggs, a black chicken egg will be an exciting change.

And we may always wonder like, “ how does it feel, taste, and smell. The same wonder is also expressed in the case of Easter egger.

The same exciting feeling was also observed when the blue-laying chicken was also discovered.

Beautiful rainbows of egg shades are common on social media.

For example,  photo pixel and Instagram have a hand full of fantastic photographers who showcase their unique egg varieties and color regularly.

Thus, it is not surprising we want to try out something different. The chicken-keeping norm is making a U-turn after years of dormancy and is dependant on commercial poultry farms and picture-perfect brown and white eggs.

Here is a video on a Black egg taste test

What Does a Black Egg yolk Mean?

If you ever notice an unusual color in your egg, don't eat it. Green or black color spots inside the egg can be a sign of bacterial or fungal contamination.

No chicken breed lays black eggs, even the highly talked about Ayam Cemani. However, the only birds that lay something like a black egg are the Emu, Cayuga duck, and Owakudani

Are black chicken eggs black inside?

Black chicken eggs are not black inside, neither are they black outside. This is because no black chicken lays black eggs, even though they do, the shell color does not have any influence on the nutrient and yolk color.

Can You Eat Black Eggs?

You can eat a black egg if it ever exists because the color of an egg does not affect the nutritional contents of the eggs-be it a green, blue, or white egg.

An egg should be unique, blended with some imperfection because that is what nature is all about.

Appreciate the eggs you have on your farm, and keep your ladies happy.